Residents of Ihindu in Naivasha yesterday blocked a section of the Nairobi-Nakuru highway in protest over frequent road accidents in the area.

In the last one month, eight people have been killed by speeding motorists at the section of the road between Kinungi and Ihindu trading centres.

The residents rejected efforts by the Kenya National Highway Authority (KeNHA) to erect rumble strips on the road, and instead demanded speed bumps or a flyover. 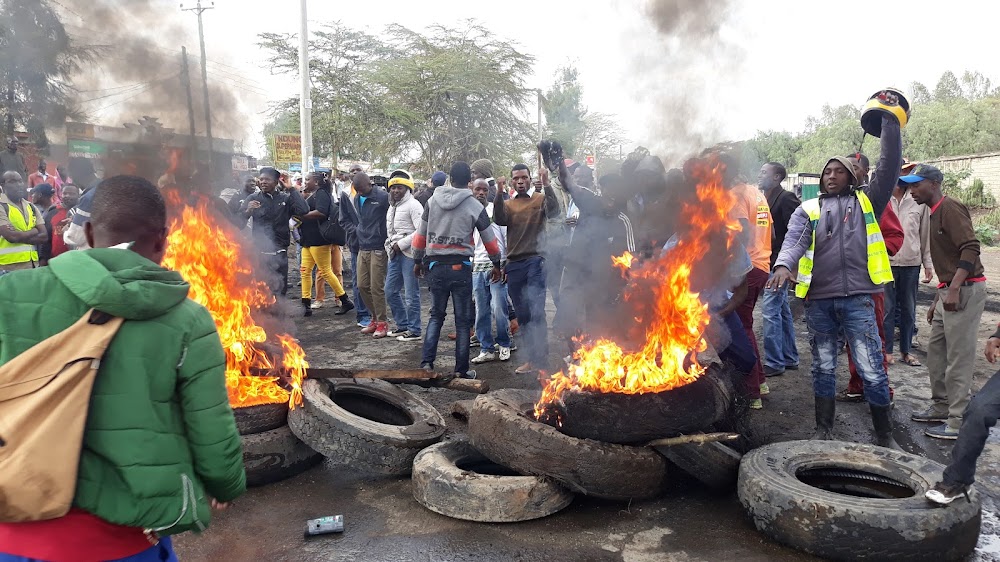 The protest was triggered after an accident victim was laid to rest in the area. The man was hit and killed on the spot by a speeding car at the weekend near Ihundu market.

Area MCA Stanley Karanja dismissed efforts by KeNHA to erect rumble strips, terming them as ineffective in dealing with speeding vehicles that were causing accidents.

“We had petitioned KeNHA to erect three speed bumps in this area in a bid to reduce the number of accidents on the section of the road but they have rejected this,” he said.

Mercy Njeri, a local resident, said they would continue to erect their own speed bumps until KeNHA agrees to permanently deal with the crisis.

A senior officer from KeNHA, who declined to be named, ruled out erecting bumps noting that rumble strips were effective in controlling speeding motorists.

“Their cries are genuine but according to the design of this road, we can only erect rumble strips here and not speed bumps as demanded,” said the official.

Tracking and monitoring motor vehicles is not new to Kenyans. Competition to install affordable tracking devices is fierce but essential for fleet managers who receive reports online and track vehicles from the comfort of their desk.

Posted by Editorial Team - November 20, 2020 0
It’s Official!. The self-proclaimed President of Comedy has launched entertainment studios in Kenya, a big development that adds to his…

Rohlik raises $119M at a $1.2B valuation to grow its 2-hour grocery delivery service in Europe – TechCrunch

Posted by Editorial Team - July 1, 2021 0
“Instant” grocery delivery has been a big theme among food startups in Europe, where customers can order from a limited…

Posted by Editorial Team - May 27, 2021 0
On Wednesday, a guy walked to the center of the road and blocked President Uhuru Kenyatta’s driving car for up…

Posted by Editorial Team - April 12, 2021 0
Nominated MP Maina Kamanda has finally spoken out about his fight with Covid-19, which he acquired whilst campaigning, noting that…